The Final Four is here and we only have three games that count left in this football season and we’ll be left with nothing but off field news with coaching staff changes, mini camps, spring practice, recruiting and draft coverage until August so enjoy it! 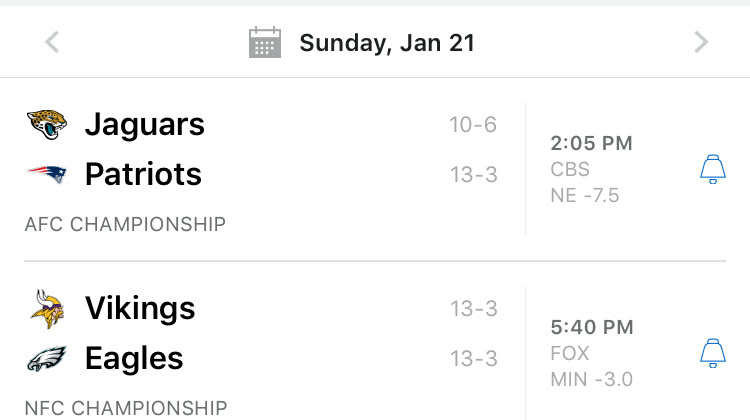 I think Leonard Fournette is a bad man who can keep the Patriots from crowding the line of scrimmage too much and give Blake Bortles some looks at plays down field. I think Jalen Ramsey can slow down Gronk to a degree. And who better than Sacksonville to get after Tom Brady? [Side note: Don’t believe all the hype around TB12’s hand. I’m shocked that was even news. Nothing was going to keep that guy from starting on Sunday.] Even with all that, I think the Patriots pull out the victory, but do not cover with a score on the under, 23-17.

As much as I was against the Vikings last week, the tables are turned for them this week. This will be a defensive struggle so points will be at a premium. Many are acting like Case Keenum is a true backup quarterback, but he’s been lights out this season and will make more big plays than Eagles’ backup QB Nick Foles so that’s why I give the edge to Minnesota to cover on the under, 24-10.